Home» News » What direction will take the prices of zinc 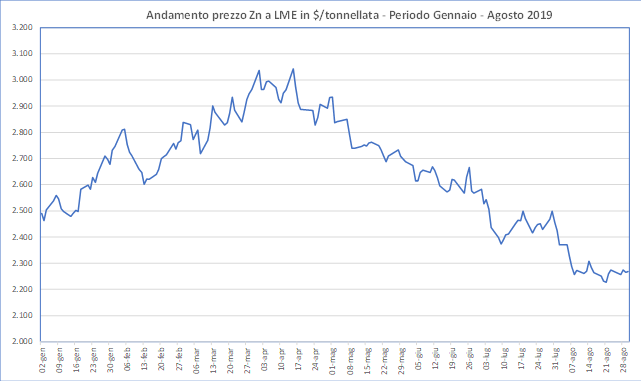 This price volatility, together with geopolitical uncertainties, He has prompted many research institutions and the well-known international experts to refrain from making predictions for the rest of the 2019.
Only two banks, Istituto San Paolo in Italy and Commerzbank in Germany, They have advanced forecasts that see the prices to reposition 2.500 $/T with fluctuations of ± 500 $/T, while the Metal Bulletin puts the price at 2.500 $/T.
So far we report other people's predictions; from the hand of the writer, stronger than forty years of zinc knowledge, let's start with some basic data published recently dall'ILZSG :

Projecting these figures on the next four months and excluding strong shocks to the world economy, it can be assumed that the zinc deficit will be reduced and the availability of physical metal will be able to meet demand. Indeed, the decline in consumption of 720.000 tons will be partly offset by production decline 620.000 tons.

There will be no increase in production in the West, while in China , after 4 months of production reduction effect of restrictions, imposed by the central authorities to foundries and mines to address the serious environmental damage caused by years of neglect, July is just that there has been a recovery. These restrictive measures have resulted in lower production of metal, because the foundries were forced to prolong the stops to modernize facilities, and a reduction in mining production was fragmented into a myriad of small polluting and uneconomic mines. All this has had an impact on regular supplies of concentrates by foundries that have been forced to increase the import by paying, Moreover, Handling Charges (Tcs) of 290 $/T to the miners to grab minerals low in pollutants, Which: Pb, As, Cd, Hg, With a, etc..

From the side of the consumer, the question is not intended to explode, since the automotive, absorbing 5% of world zinc consumption, It is currently in the process of falling everywhere (China -14%, Germany -12%); this while the construction sector slows.

In this situation, the current account deficit tends to decrease and the current stocks should start to grow and consequently Backwardation (for higher cash prices than three months) It should give way to Contango (reverse position to Backwardation) which has already peeped the 25/07/19 with a three-month price higher than that for cash 7 $/T. It 'a little' early to know whether investors will inject liquidity into the system, but a consequence of Backwardation occurred: The premiums required by the producers to the sale of zinc were gradually reduced until 100 $/T in Antwerp.

A final uncertainty is related to the performance of the dollar / euro exchange rate, seen that each of the Euro depreciation of 1% corresponds to an increase of the 0,5% the dollar price of zinc .
In light of the foregoing, the market will tend to balance but volatility is likely to persist and prices of zinc will be subject to daily fluctuation, with fewer large swings, so a return to the levels of June 2019 it is not impossible.